Ebook Conquista Twitter - El poder del Follow
You are here: Home / Blogging / A Light At The End of the Dopamine

We are immersed in the rat race of media consumption.

While pushing little levers that hit our dopamine center, we feed the Triangle of Attention-grabbing Corp, where it remains a mystery how our time get lost.

The triangle formed by the 3 biggest media companies of all times (Apple, Facebook and Google) take advantage of the apparently innocuous habits induced while using their tools.

We should be aware that we are monkeys with a bigger brain: persuadables, and not free from others commercial and personal intentions in a Central Thought And Sentiment Control Room somewhere in California.

“When you refresh your e-mail, look at your text messages, or check your Instagram account, you get a hit of dopamine, and an especially big one if you encounter something positive. This taps into a basic psychological construct: intermittent reinforcement. With intermittent reinforcement, you don’t know if you’ll be rewarded for something each time you do it, but you might be, and the anticipation drives you.”
Source: The Self-Driven Child: The Science and Sense of Giving Your Kids More Control Over Their Lives

The quote above puts into evidence how the big media corporations trick us into believing that we are in control. But we are not. Not all the time.

With the intermittent reinforcement given by infinite scrolls, pull to refresh, notifications and “likes”, is clear that most of the websites we use today are designed to get us hooked.

Fortunately, some insiders had already taken action against this. By recognising that they are also responsible for the consequences of our digital addictions, they’ve decided to flee the Leeching’s Dark Force.

When you pass on a street that should’ve had a stop sign and you have a car crash accident, the State or the company that built the road can be held responsible for negligence. Web applications should also be responsible when they fall behind some quality or guidelines, especially when bad or intentional design can interfere with overall health and social interactions, create mental disorders or even make someone hurt himself or others. Because it is not only about losing our focus and time on mindless activities. Bad design can also lead to suicide.

Tristan Harris, who worked as a Design Ethicist at Google, was aware of the impact a bunch of white designers in San Francisco were having on billions of people. Worried about the negative impact Google was having on humanity, he put together “A Call To Minimize Distraction & Respect Users’ Attention”, a presentation with 141 slides about the path that the race for our attention is carving in our future.

The presentation, intended to be a call of action inside Google, spiraled taking life on its own, and converting into the “Time Well Spent” philosophy that sparked newly formed organizations like the Center for Humane Technology, co-founded by Harris himself.

It is said that thanks to Harris’ work, some thoughtful features were incorporated into Androids’ phones. Since 2018 –5 years after his presentation–, we can switch your Android phones into “do not disturb” mode, receive a digest of notifications (or no notifications at all), and set your phone to a “relax mode” when it’s time to go to sleep.

The acknowledgement of responsibility can also be seen across other individuals that took action despite the consequences it might represent to their businesses and personal lives.

Take Dong Nguyen, the creator of “Flappy Bird”, a game that became viral and accrued 50 million users in record time. Despite making 50k/day with the game, he deleted the game from the iPhone and Android stores, because he felt the game went totally south: instead of relaxing, people were addicted to it.

He is a good example of a self-regulated person that didn’t want to enter History as someone that tapped into unintentional behavioral psychology for his own gain.

Is the path being corrected or is it just a delusion?

Let’s be honest, the evidence is overwhelming and it’s absurd to remain silent in situations like the one presented to Nguyen, especially when it is common knowledge that the World Health Organization has already listed game addiction to their list of diseases.

How bad is this mental health crisis? Is it a coincidence that meditation apps like “Calm” are valued at 1 billion dollars? Or that its competitor “Headspace” has 65 million active users and 2 million paid users? Why is it that when searching for “digital distraction” on amazon.com’s book section, we are presented with more than ~7500 results? Why does Apple’s CEO –Tim Cook– doesn’t want his nephew to use any social network? How big is this mess?

These are questions difficult to solve, but I suppose Google knows better than I do, and it might be the reason why they have a page dedicated to our digital wellbeing. Instagram has also adhered to the “Time Well Spent” movement, by enabling the “Caught Up” and “Do not Disturb” features in their apps. Not a bad start. But all of this is optional when what we really need is to demolish the infinite pools and algorithms that focus on keeping us hooked by default.

Society could be regulated to keep the big corp from trespassing certain boundaries. We need education to make the best use of our digital life. Are we heading towards embedding these new values in our society?

We should be able to decide what is the life we want to live, but it is not fair letting our lizard brain think that we are deciding for ourselves when we go into a Facebook rabbit hole for 45 minutes.

The dopamine addiction is real, but we shouldn’t have it as a default option like smoking on a plane. The need to disconnect is a silent scream purging out in the form of anxiety, stress related health issues, families tearing appart or –in the worst cases–, suicide.

Hopefully, as with the smoke of the cigarettes, we will frown upon parents dismissing their children to check the latest notifications, babies under 2 with touch screens at hand, overworked employees or simply badly designed applications.

As with most changes in society, this one will take time.

While the boundaries are not set, we need to take care of ourselves and our kids, using the tools we can find before the transition is completed.

But at least, there is a tiny blip of light at the end of this mess.

I took the photo of this graffiti photo in Porto in the summer of 2018. 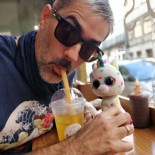